The whole movie has a clear, crisp appearance, and a new sheen of consummate professionalism that really gives the artistry a big boost. It’s been compared to the likes of Fight Club, or Girl Interrupted , but I think American Psycho has a far more bitter, cynical sense of humor.

Mildly appropriate script references aside, I absolutely adore American Psycho. Though described as a horror movie, I see it more as a dark comedy. There are scenes depicting brutal murder, and multiple acts of sexual violence, but these never came across as “scary” to me. These scenes, in my opinion, are disturbing in concept rather than horrific in the way you would expect from a horror movie. Despite the inherent lack of horror as one would commonly define it, the implied horrors of capitalism and toxic masculinity are on full display. I’ve seen some refer to American Psycho as a “feminist film”, which I partially agree with. I can agree that Bateman’s insane mistreatment of women is so cartoonishly fucked up that it ends up doing a complete 180 and becomes something empowering. Something that women can point and laugh at and say “Look at this stupid man! Look at how horrible he is!” But I don’t think this was intended to be the main satirical focus of American Psycho.

American Psycho is fantastic as a satire. I can’t even begin to touch on how masterfully the film kicks the balls of yuppie culture and materialism (as I am not qualified or knowledgeable enough to do so), so the least I can do is shower it with praise. The world that Patrick Bateman lives in is so outlandishly hilarious that it makes you feel even worse when you remember it's not that far away from reality. The men who work on Wall Street are still just as self absorbed and mind numbingly rich, so maybe there’s a real life American Psycho happening right now! (Nightmarish indeed)

Aside from how much I love the film for what it has to say, I also (unfortunately) found myself attached to the protagonist, Bateman. No doubt, he was written to be relatable, but just the right amount of relatable. Relatable enough that pathetic losers can look at him and think “Wow, he’s just like me!” but deep down, they know he is nothing like them. Nor is he like any of us. I can accept this, but still self indulgently stare at Bateman and think evil thoughts. Perhaps it is because he’s such a horrible person that I find myself so obsessed with him. It's human nature to want to stare at a car crash while it's happening, and Bateman is like a human car crash. It’s fascinating to watch him! He’s like an alien that happens to be a stockbroker in the 1980’s, something so distinctly non-human pretending to be normal. I think if I saw him in public I would shit my pants. 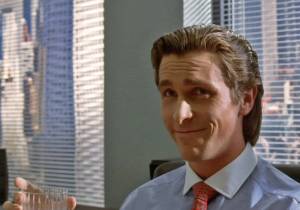 Anyways, because this is MY hellsite, here's a fun collection of Patrick Bateman facts that make me giggle and twirl my hair

Some of his favorite music:

"Whitney Houston (Arista) is one of the warmest, most complex and altogether satisfying rhythm and blues records of the decade and Whitney herself has a voice that defies belief"

I point out a book on top of the desk, next to the San Pellegrino bottle. The Art of the Deal, by Donald Trump. "Have you read it?" I ask Kimball. "No," he sighs, but politely asks, "Is it any good?" "It's very good," I say, nodding.

"The Patty Winters Show this morning was about Nazis and, inexplicably, I got a real charge out of watching it. Though I wasn't exactly charmed by their deeds, I didn't find them unsympathetic either, nor I might add did most of the members of the audience. One of the Nazis, in a rare display of humor, even juggled grapefruits and, delighted, I sat up in bed and clapped."

-Sony Watchman Pocket TV (the FD‐270) that has a 2.7‐inch black‐and‐white miniscreen and weighs only thirteen ounces

-A multidisc CD player by Sony, the MDP‐700, which spins both audios and videos

a general list of Bateman quirks I find humorous. He is so funny, but in the pathetic way.

I sidle up to a couple of hardbody rich girls, both of them wearing skanky Betsey Johnson‐type dresses, and I'm wired beyond belief and I start off with a line like "Cool music – haven't I seen you at Salomon Brothers?" and one of them, one of these girls, sneers and says, "Go back to Wall Street," and the one with the nose ring says, "Fucking yuppie." And they say this even though my suit looks black in the darkness of the club and my tie – paisley, Armani, silk – is loosened. "Hey." I say, grinding my teeth. "You may think I'm a really disgusting yuppie but I'm not, really," I tell them, swallowing rapidly, wired out of my head. "Patrick is not a cynic, Timothy. He's the boy next door, aren't you honey?" "No I'm not," I whisper to myself. "I'm a fucking evil psychopath." "Some nights I would find my self roaming the beaches, digging up baby crabs and eating handfuls of sand...I even dragged a beached jellyfish back to the house and microwaved it early one morning, predawn, while Evelyn slept, and what I didn't eat of it I fed to the chow."